The “voice” of Louis Guedon is a story written in response to the Relay of Voices interactions. Louis Guedon is a local farmer and farm supply manufacturer in Church Hill, Mississippi and spent several hours with collaborating artists Victoria and Tom Styrbicki on Thursday, October 10, 2019, the ninety-fourth day of Relay travel down the Mississippi River. This story, amongst those of other voices of the river, was performed during the Relay at various community events.

Louis Geudon introduced us to his son Matthew and granddaughter Mary Noble. He says, “Matthew runs this business, and I see to it that it runs.” Grabbing a piece of paper out of Matthew’s hand, he says “is that an order,” and ends up carrying this with us for the next 15 minutes or so as he tours us around the warehouse at a break neck pace, meaning to put it on his clipboard all the while, and only finally remembering it in his hand and resolving the issue before we head out to the fields.

In summer months, Louis’ Bluff Farm Supply produces seed, fertilizers, herbicides and pesticides, while in the fall and winer months, they focus on the deer hunter industry, retailing corn—they grow it, harvest it, dry it, sell it, mix it to blend with seed to specifications provided by the state. These deer are eating well. We tasted the rice meal and smelled the mix, like a harvest wheat pancake!

Louis’ family has been farming on the Mississippi River for a hundred and fifty plus years, continuously. His father of eighty-two years is still farming. As Louis says, “he’s seen the highest flood in the history of the world, the longest lasting flood in the history of this family, he’s seen the most floods in one year that there’s ever been, he’s seen the 500 year floods, he’s seen 200-300 year flood—and he’s got a ten year old grandson who’s seen all that too. The river is changing,” he went on. “It’s not like it used to be. And how it’s affecting us….” Elevation levels have shifted with the rising water levels, and what used to be a community that didn’t need a levee, now is a place very much in need of one. For the first 50 or 60 to 70 or even 130 years it didn’t bother us, says Louis, but now, it’s a problem. They lost 7,000 acres of crops this year. When they lose that kind of acreage it’s a killer. “Your notes go right on, your overhead goes right on, your insurance goes right on, your land tax goes right on, all that goes right on and you’re getting no income. No income. And you’ve got to keep it clean and out of the weeds to get it ready for a crop for next year so you’re in debt.”

Now was time to stop just talking about the fields and go have a look at them. We climbed in Louis’ truck and headed over to his house to grab his rifle (and a few beers for the road)… Now Louis is already packing a sidearm—a pistol he’s been carrying everywhere he goes since age 14. When asked why, Louis proceeded to pick up a large smooth stone from the ground, dust it off, then toss it out several yards, pull his pistol out of its holster and shoot at the rock… “I’m usually turning big rocks into little rocks, that’s what I usually do with it, k? I just like to shoot it… But you’ll see, when we get down here, there are no hard surface roads, there are no permanent buildings, there are,” and he’s shaking his head, “when the water’s over it, it looks like the Amazon, and this is just like it was a hundred years ago down there. So you’re gonna see a water moccasin or wild hog, and sometimes you need your pistol—and you don’t need one till you need one RIGHT NOW.” And just as we finished speaking, and shooting, a customer drives up…

Back to the story of the rifle though. Louis was taking us out to his fields in the bottoms. We ran into his son Emile who was working on rebuilding a levee to protect the land from a backwater creek. The rifle came along to protect against long range sightings of wild hogs, but turned into a shooting lesson for me and Tom. Louis got really excited to learn that neither of us had ever shot an AR-15 assault rifle, that semi-automatic rifle you read so much about in the news these days. Tom has shot plenty of guns in his youth when grouse hunting, but my first handling of any such weapon was several weeks ago in Prairie du Rocher, firing an unloaded historic French Musket at Fort du Chartres. I think that might not count! Anyhow, Louis guided me through pulling the trigger, gun unloaded, several times, to get the feel of it. Then it was time to really shoot. Emile loaded a single shot, handed the gun back to me—turns out I’m a left handed shooter because I’m  left eye dominant… this was a true shooting lesson, as I worked on getting a leaf on the opposite side of the creek embankment lined up in my crosshairs. After about three efforts, I hit the target. Walking away from this experience, I still don’t know how I feel about guns, much less the AR-15, but I do know that Louis Geudon, a man very fond of his guns, is a good man in many respects, and I’d share another shooting lesson (over a beer) with him again any time. 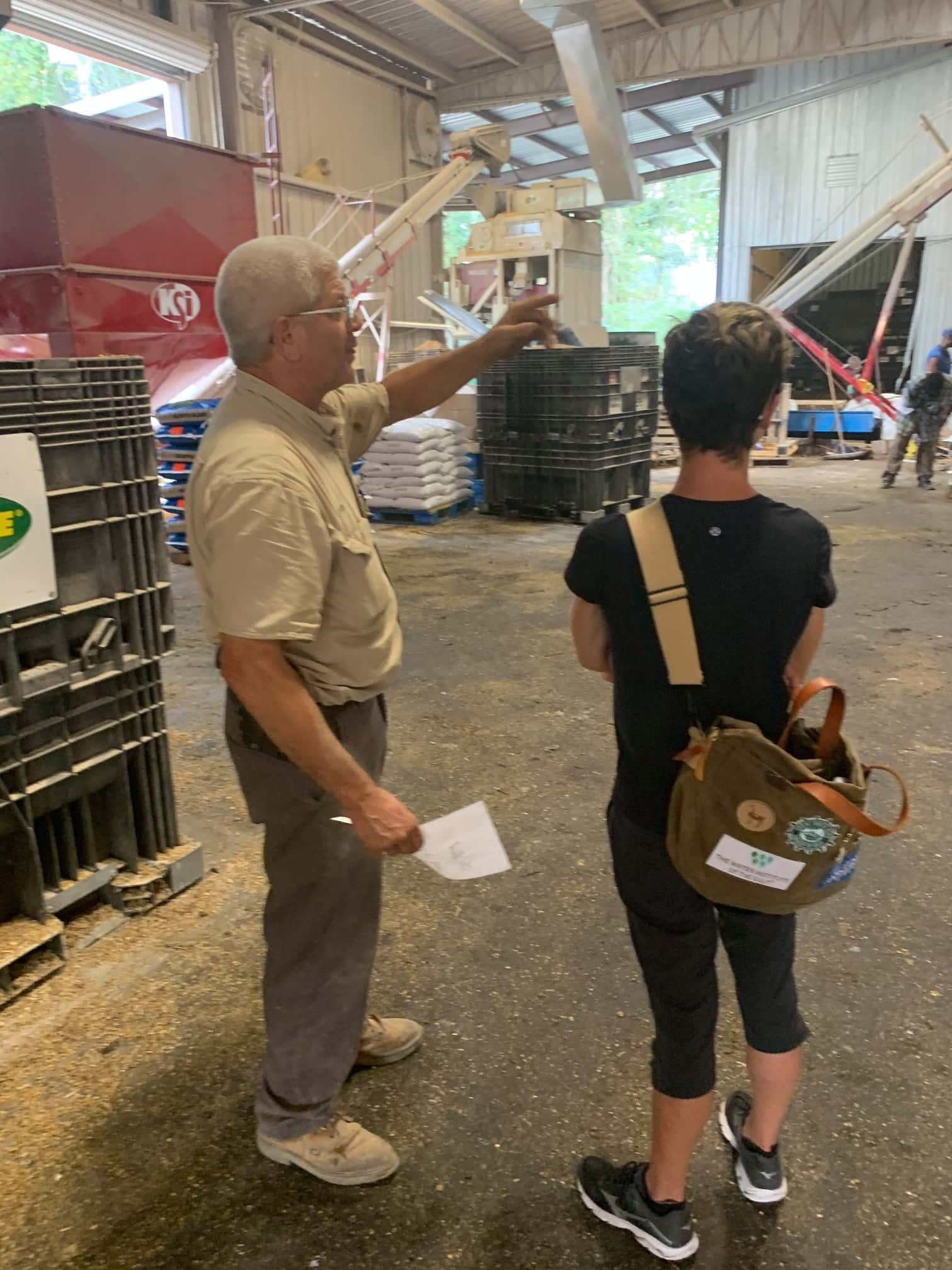 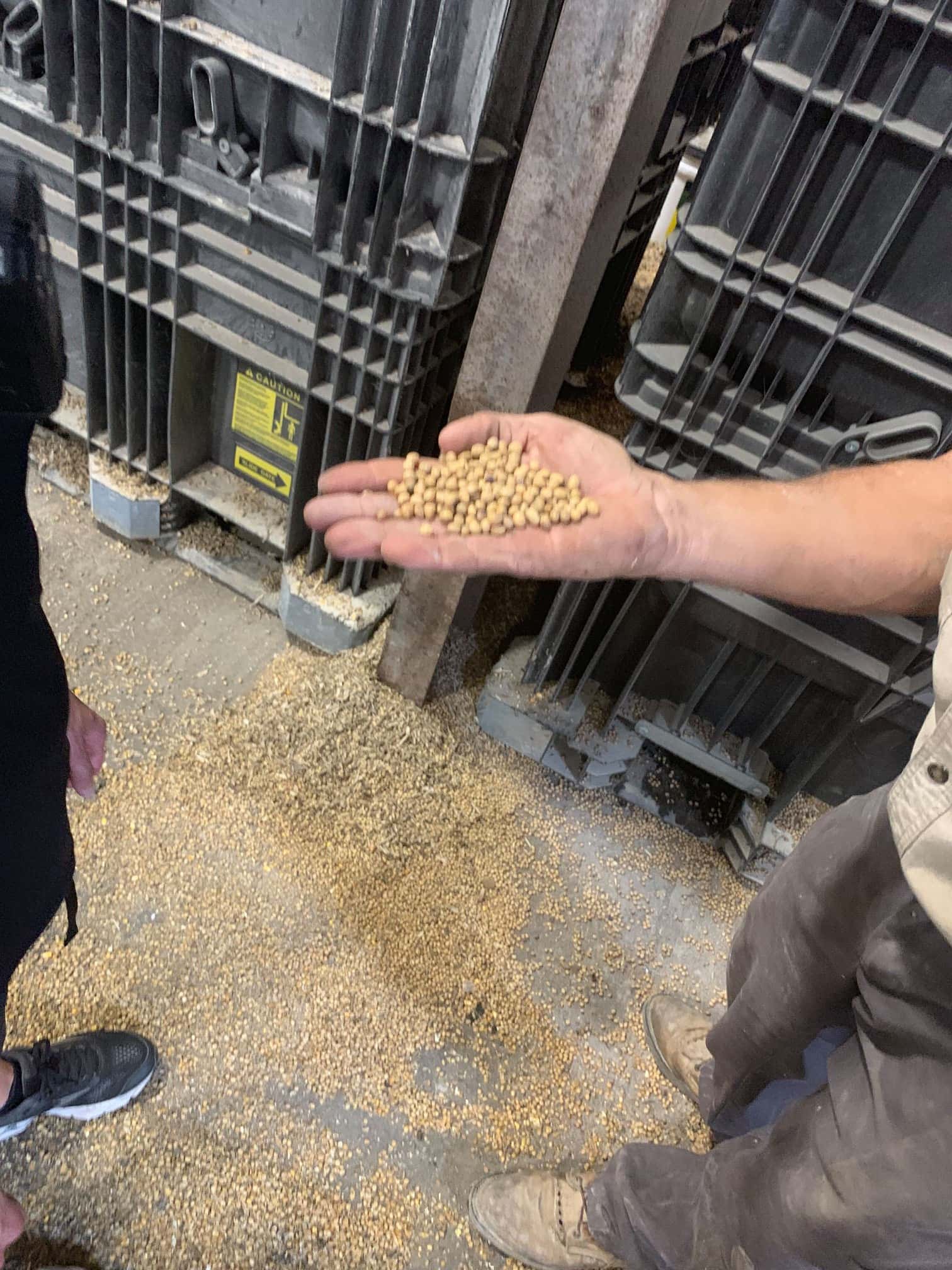 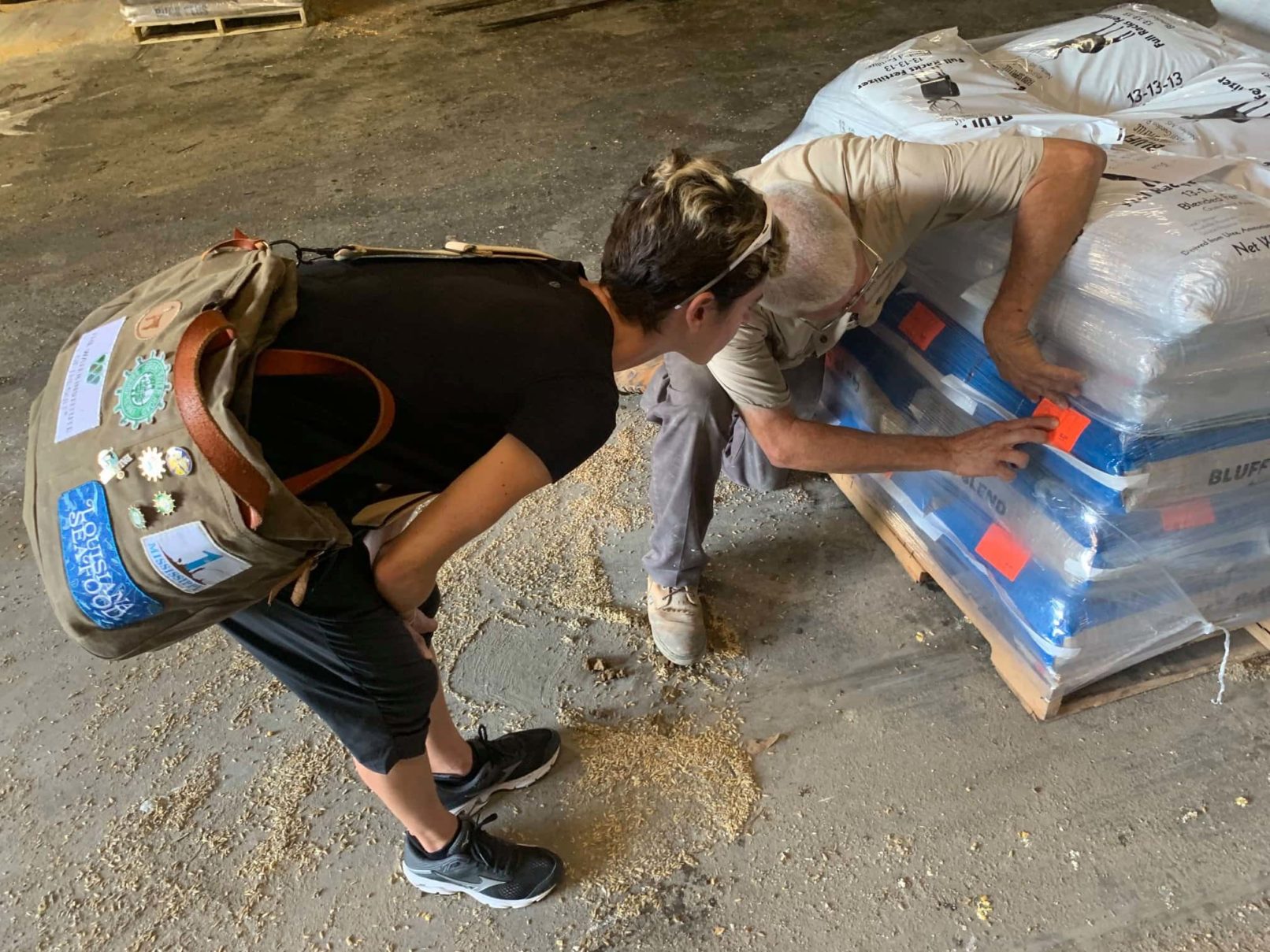 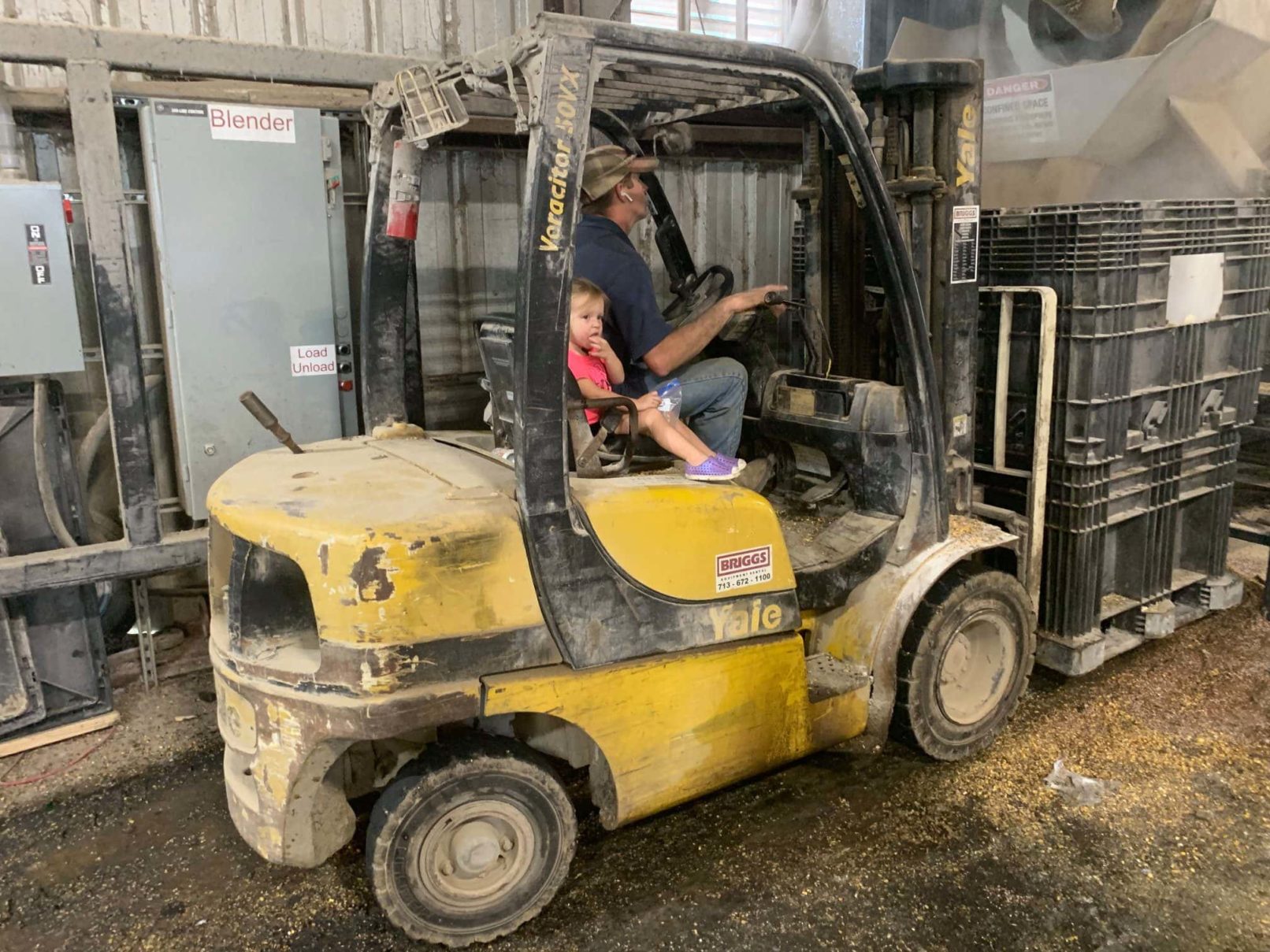 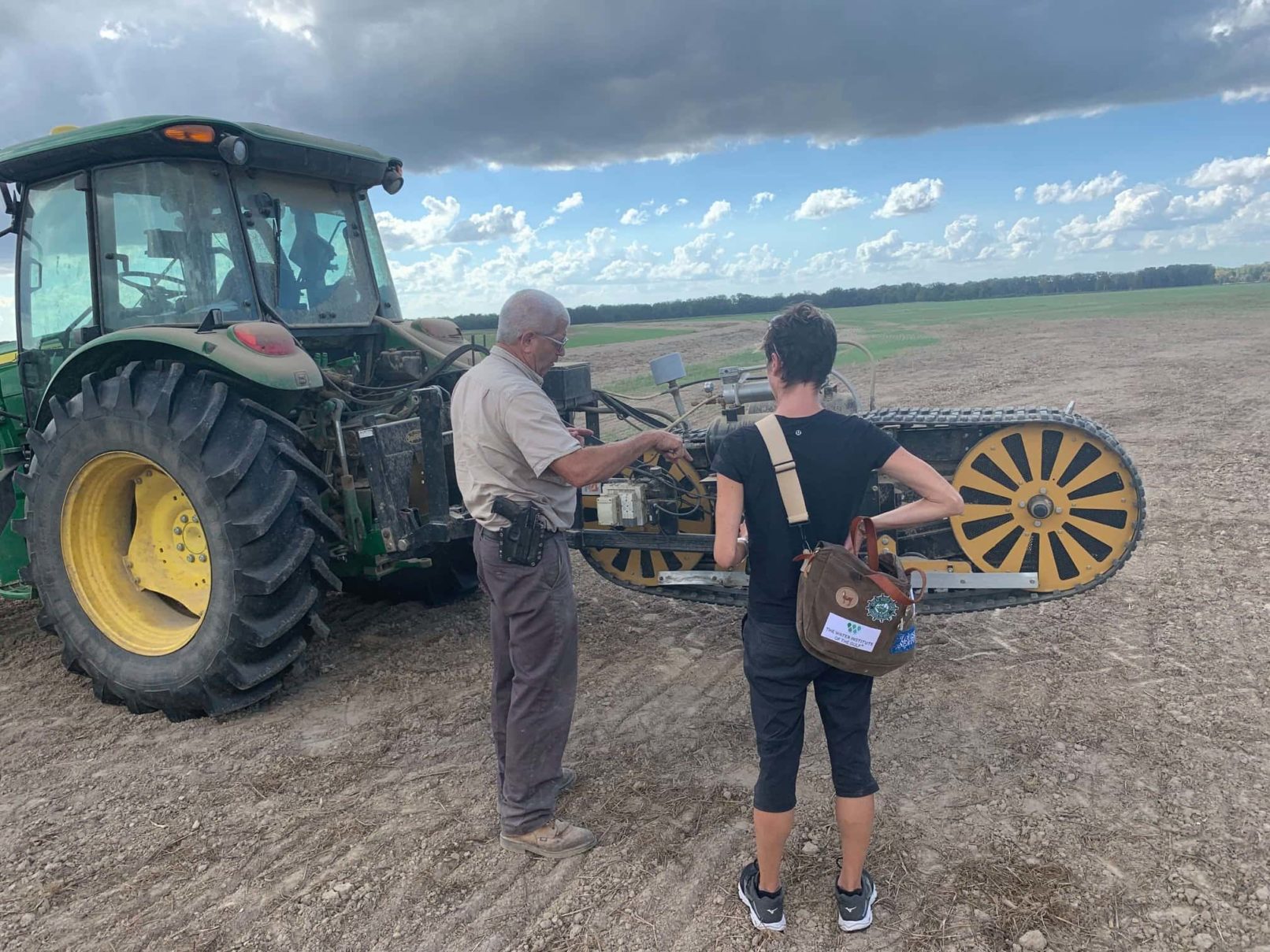 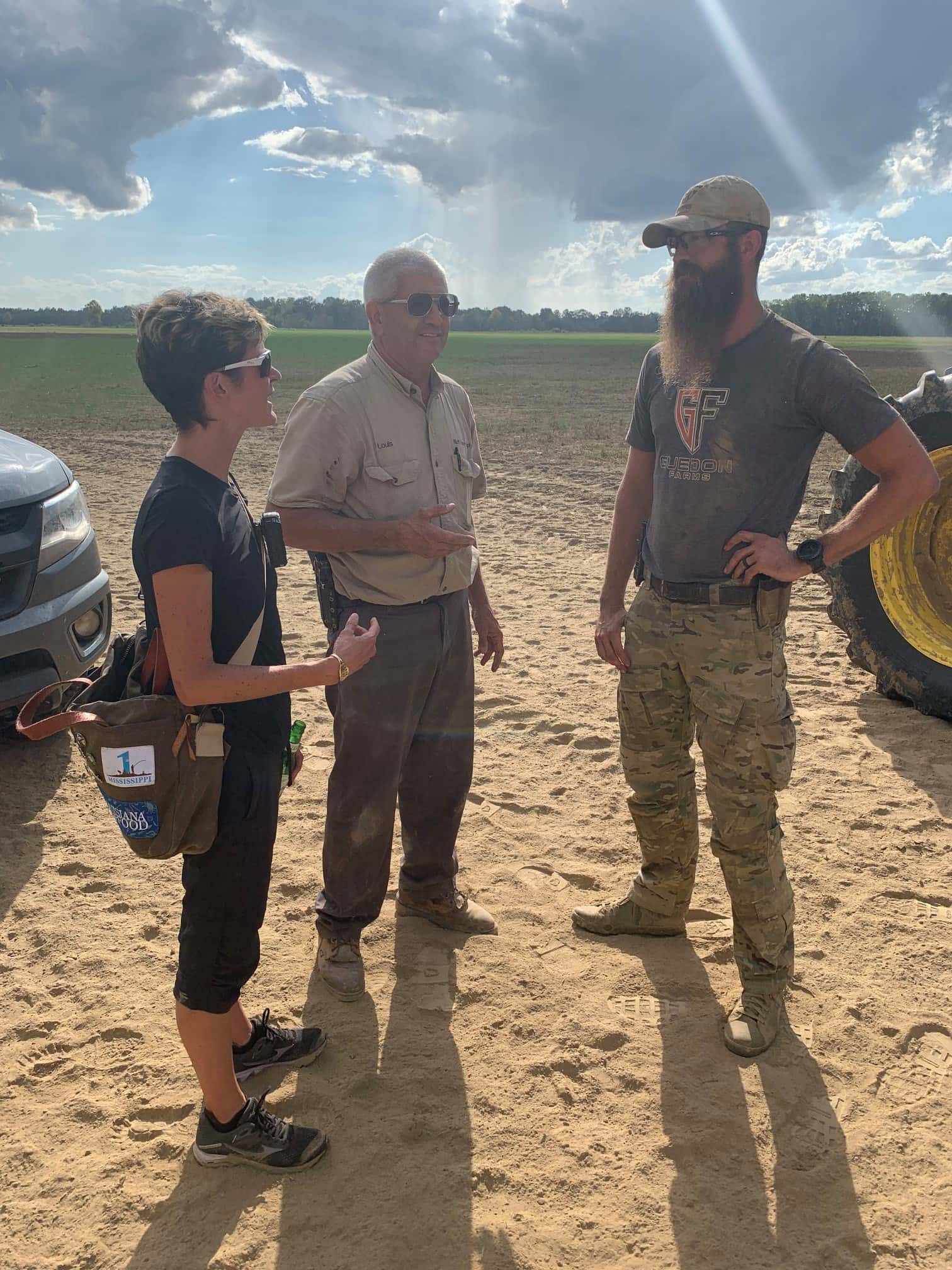 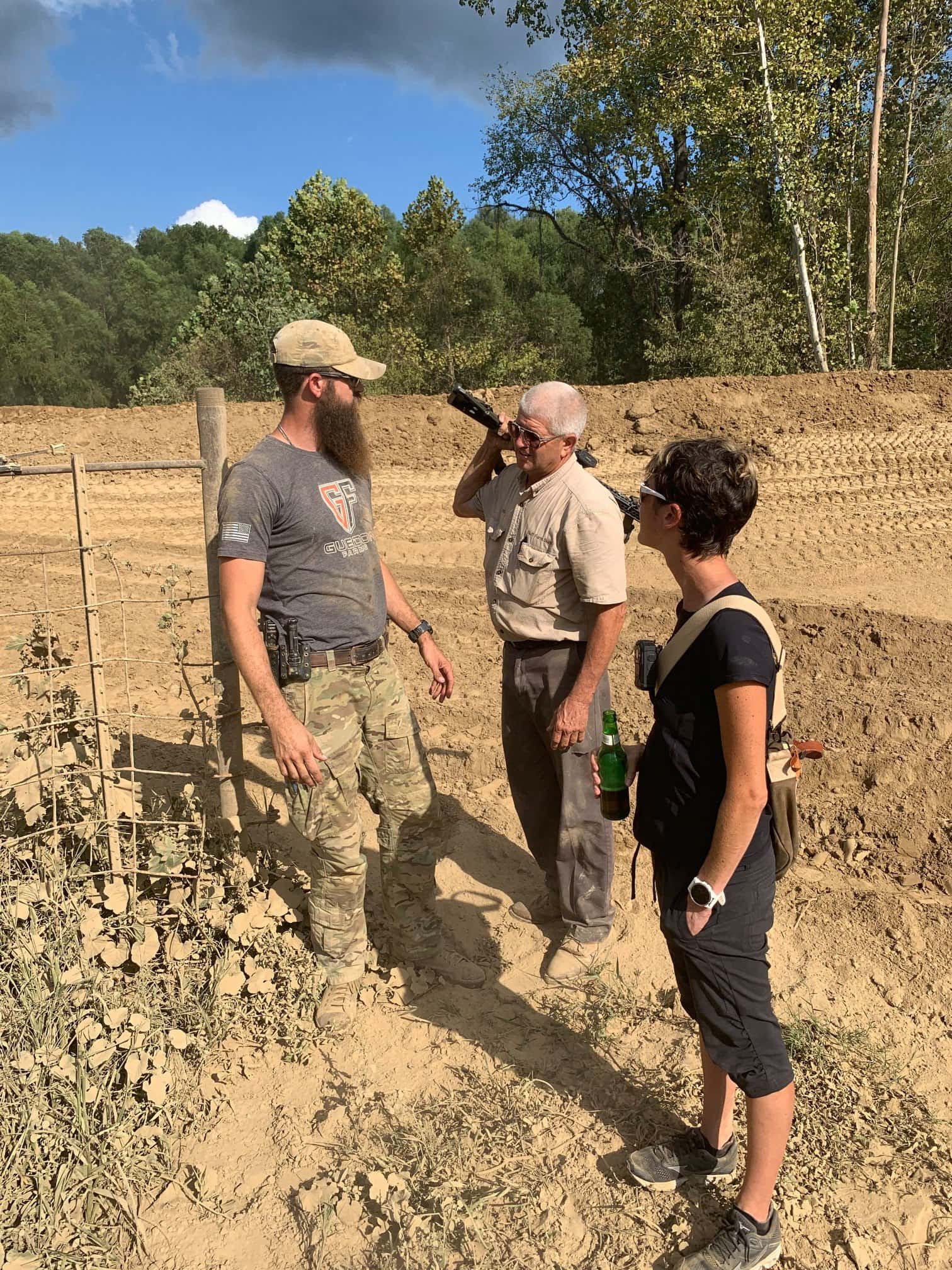 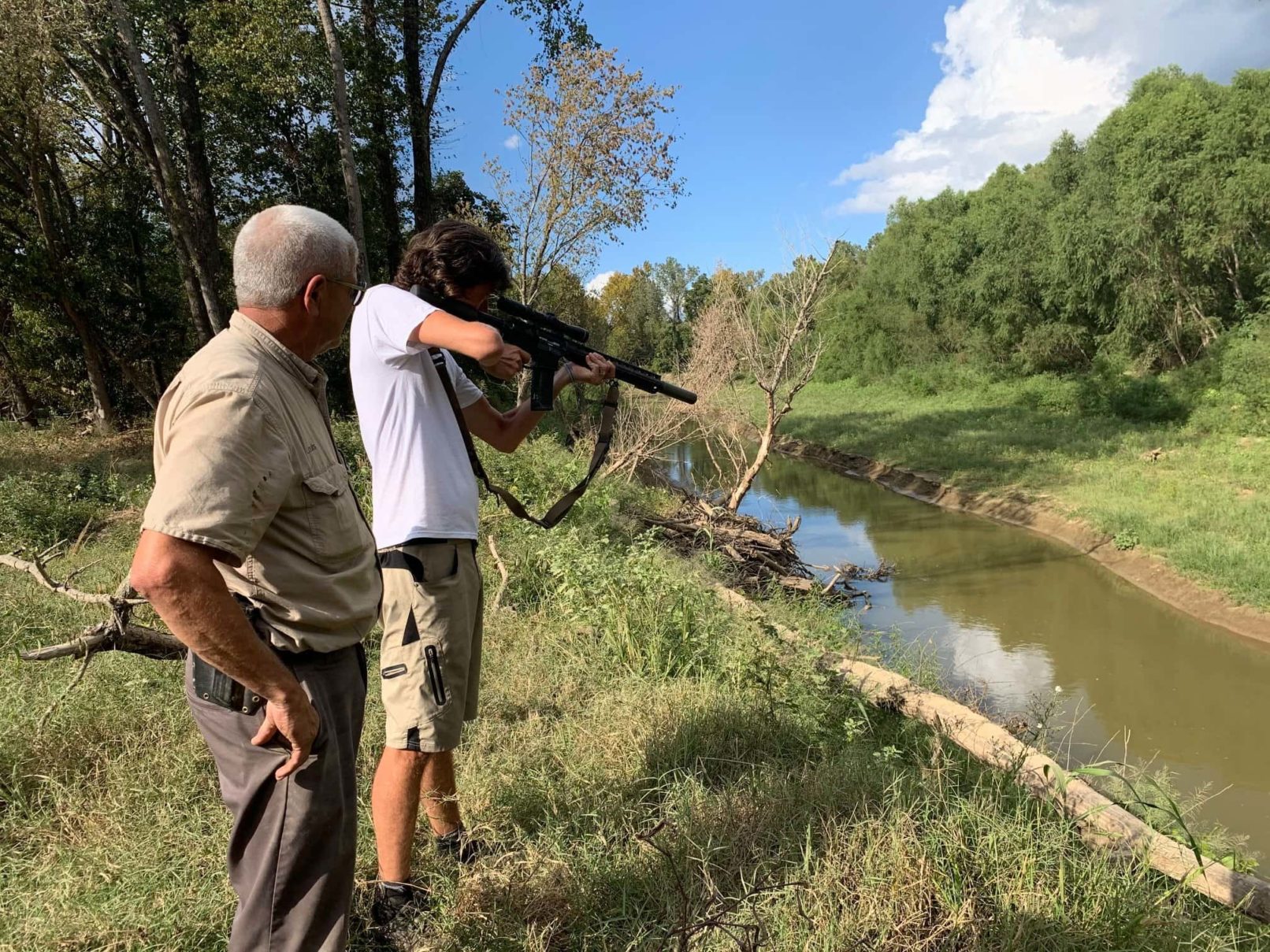 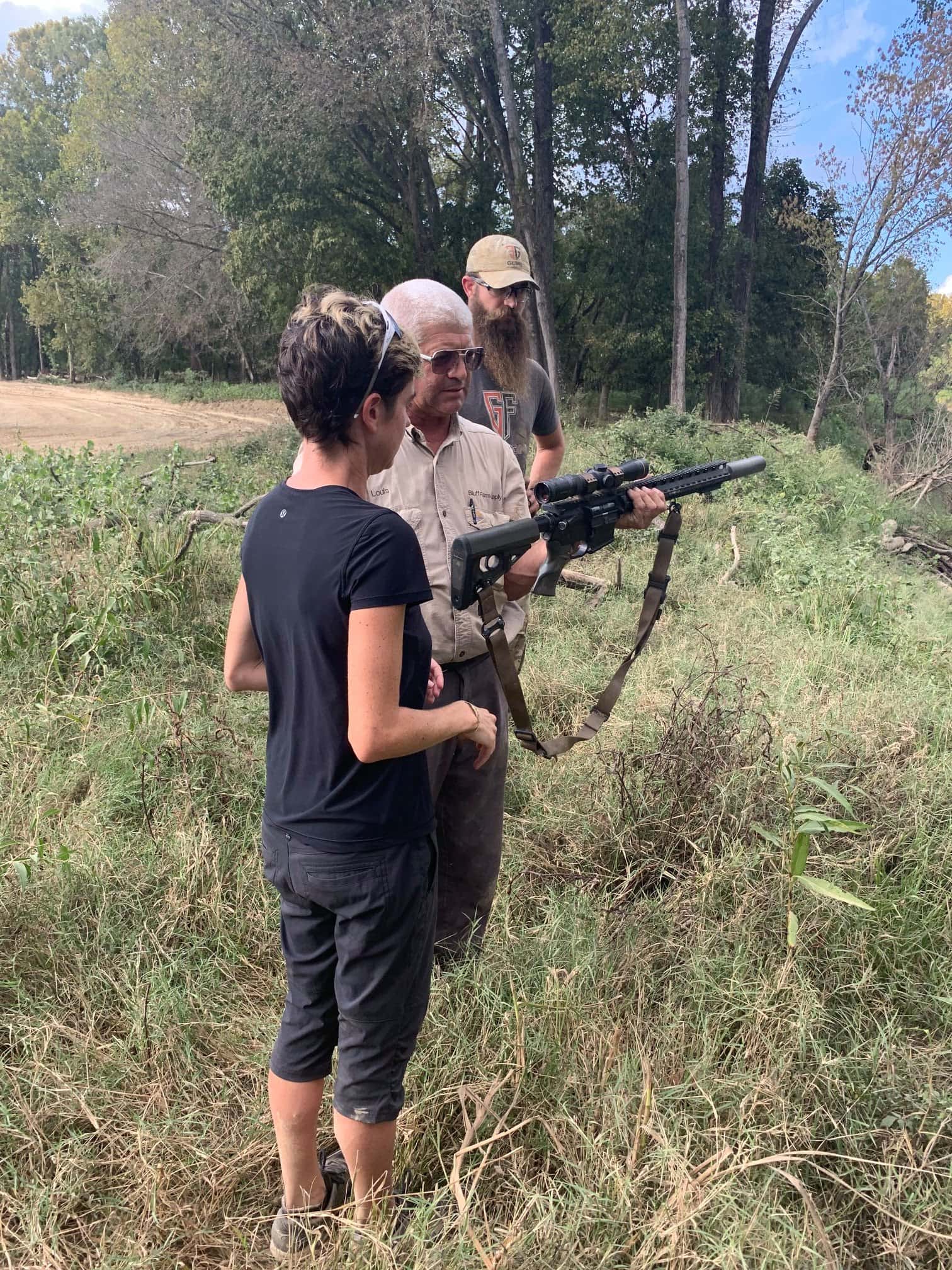 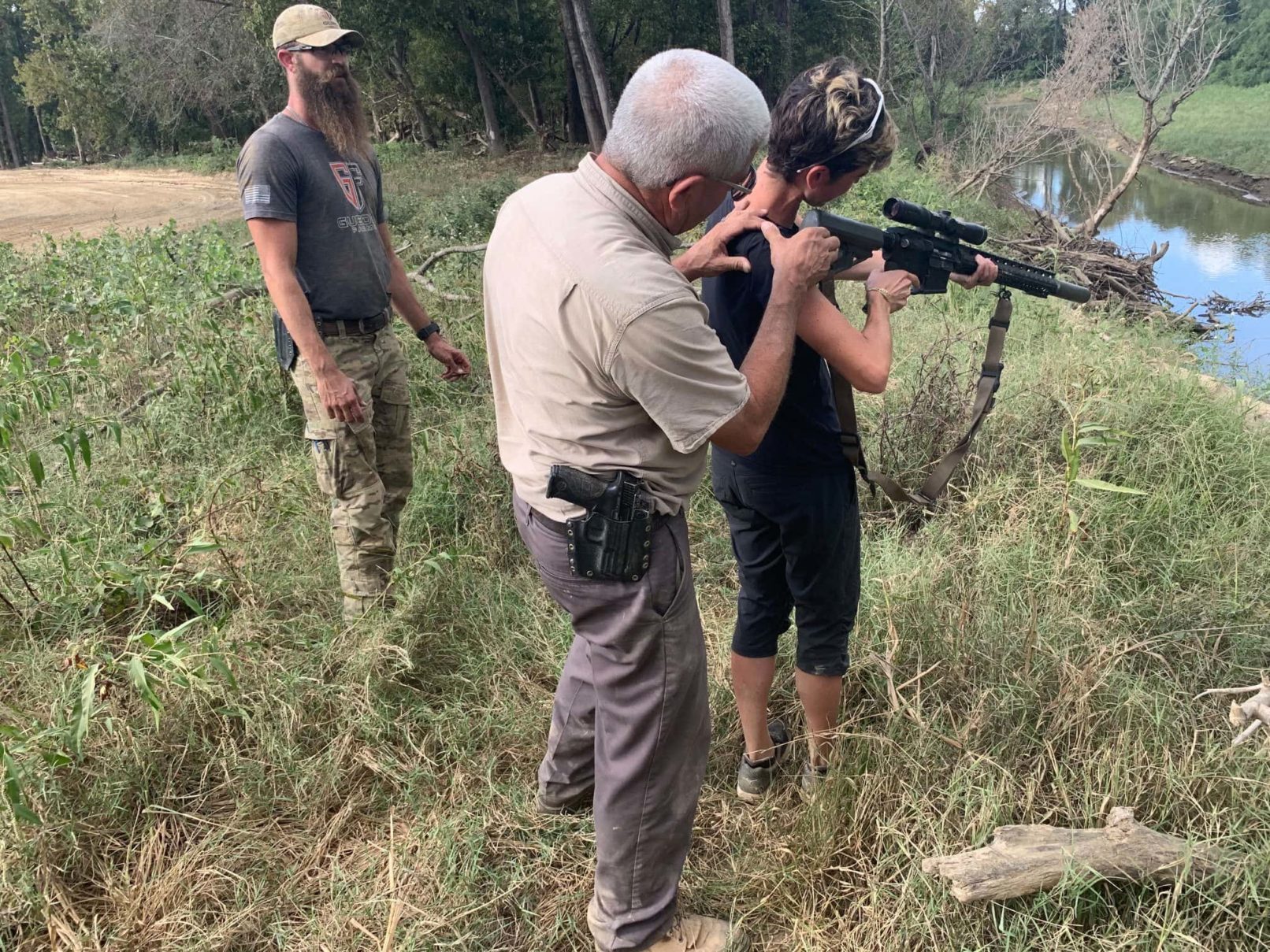